Werewolves, also known as lycanthropes, are a supernatural species. They are a type of demon that look human in one form and a giant human like wolf in Werewolf form. Normal Werewolves and Pure Werewolves look very different. A normal werewolf is a person who has been bitten by a werewolf and turned. A pure Werewolf is a someone who is born a Werewolf by parents who also are lycanthropes.

Werewolves are far superior to humans, displaying a variety of supernatural powers. Pure Wolves are stronger.

If a human wanted to become a Werewolf or the Werewolf wanted to turn someone, the human would have to drink the blood of that werewolf and then die but only through a way that doesnt kill the brain or heart. They would awaken 12 hours later and would undergo the transformation into their Werewolf form which is very painful and tiring. When transformed they would go on a hunger strike and would have to kill and drink from their kill for the transformation to become permanant or they would die in 24 hours. After they become a Werewolf, they can change at will except on a full moon.

When a full moon is up half breed Werewolves change unwillingly and go to feed. They would become hungry and desparate and would kill anything that got in their way. The full moon does not effect full blooded Werewolves as they were born not turned.

Werewolves have natural enemies. Only three have been recognized.

Their most common and most hated enemies are Vampires. For centuries the fight between Werewolves and Vampires still rage on. Vampire and Werewolf Coven members are forbiden to consult with the opposites. That was broken when Thomas became friends with Evan and both Coven species have banished them and usually try and kill them. Thomas' father is the leader of The Denali Coven, a coven of powerful Full-Blooded Werewolves that reside in Leeds

Other enemies of Vampires are Dhampeles which are Human looking Demons like Vampires and Werewolves. They are a danger to Vampires and Werewolves because they feed on the blood of both species and Humans. They have fully blacked out eyes and have razor sharp teeth top and bottom. They can only be killed by ripping out their heart.

Slayers kill both Werewolves and Vampires on sight.

Hybrid Werewolves are a cross between a Werewolf and another species which can only happen through breeding, since Werewolves cannot turn other demons. The parents must be from other species besides Werewolves. 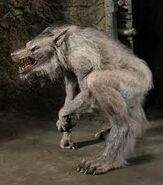